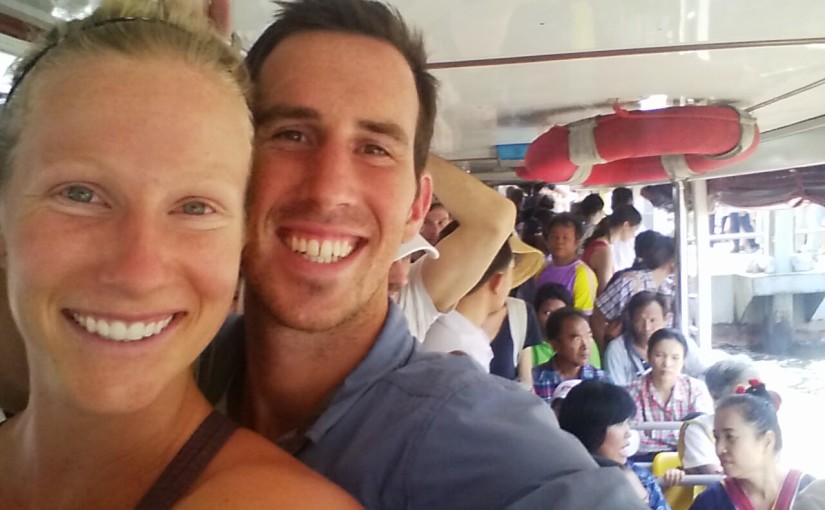 As we travel from the south to the north of Thailand, we swung through Bangkok for another day of exploring. It’s a great break between the 12 hour ferry/bus ride from Koh Tao, and the 14 hour train ride we are about to embark on to Chiang Mai. We slept in, got breakfast, then went for a jog through the city to the train station to get our tickets for later that evening. Then Eric & I walked around and grabbed a water taxi back to our hostel.

The water taxi was quite the experience! I just kept laughing as the boat workers were yelling in Thai, jam-packing people onto the boat. They’d be shouting in Thai, and shaking this metal tube filled with change. This went on for a little while, then with the use of universally understood hand motions we (and the other few non-Thai tourists) realized they were trying to get us to go even further into the boat, which seemed like an impossible task. Let’s just say you quickly get to know all your neighbors, and whether or not they’ve showered recently… hahaha. And it was like that at every stop along the river! So by the time you reach your stop, of course you’re way at the front of the boat, problem is the boats are loaded and unloaded from the back, so now it’s time to wiggle and weave back through the people in order to get off the taxi boat. It was an awesome, authentic Thai experience as we were jammed next to Thai kids, adults going to work and monks, all of us going down the river together.

After the awesome taxi boat, we grabbed some snacks for our journey ahead and some street food for dinner. We then took a regular taxi (which are all bright pink in Bangkok) and just barely caught our train.

By the way, I’ve always thought the traffic in the Bay Area was the absolute worst, but that was before experiencing the traffic in Bangkok… It took us twice as long in the taxi than it took us when we ran to the train station earlier that morning. Thus the reason we nearly missed our train. I’m convinced that some intersections don’t have traffic lights, I think the drivers just have this pact to wait behind a crosswalk until one risky motorbike decides to make a go for it across the intersection, then everyone else follows suit!

But good news is, we didn’t miss our train, and we had an awesome taxi driver who laughed at everything he said (must have been a funny guy, but we couldn’t understand him so we just laughed along anyways).

We’ll get one more stop in Bangkok right before we leave Thailand to come home, but for now – off to Chiang Mai!!

Hello! I’m writing this from Frankfurt – we made it! We’ve been here two days, but had a little mishap getting here. Our plane from Lisbon, Portugal to Frankfurt was at first delayed, then cancelled! They rescheduled it for the next day. Luckily they put us up in a hotel and took care of all the transportation to and from the airport. Phew! It was quite a day, full of waiting, many lines, and trying to figure out what was going on, when all the announcements were in Portugese haha. But, the important thing is that we made it! We even were able to go to the Christmas market in Frankfurt (which was huge and amazing!!) later that evening.

Now Christmas with the Nespor family, yay! Merry Christmas and Happy Holidays to you all! 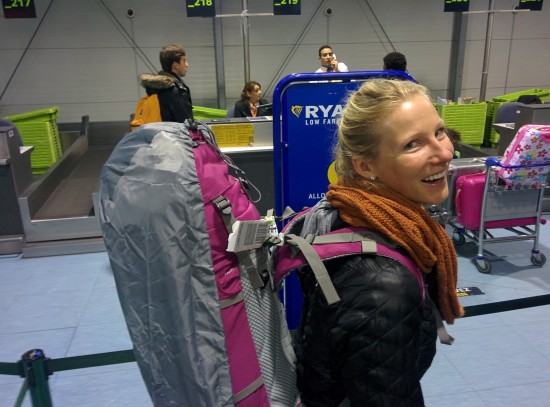