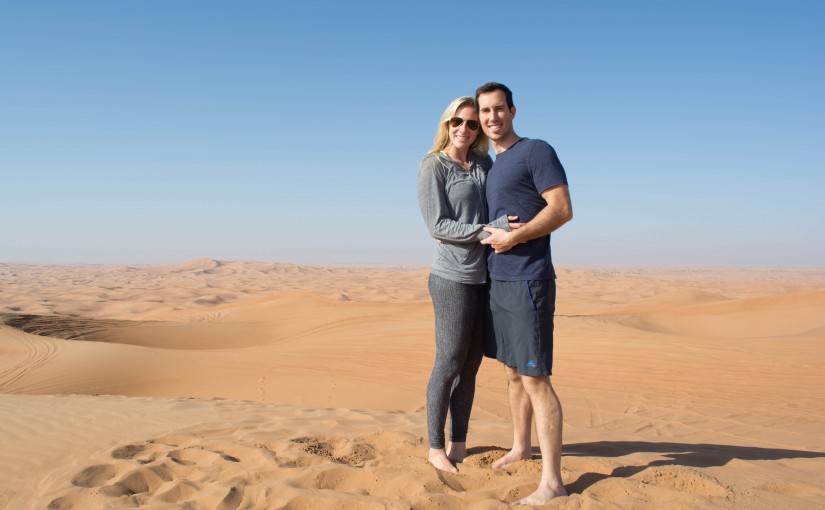 We made it to and through the Middle East! It was awesome having a 24 hour layover on Emirates Air in Dubai. We did our 24 hours pretty big!

We did a super fun “desert safari” which included getting picked up from our slightly ghetto hotel in a Land Rover, driving 45 minutes into the dessert and then the fun began! We got to ride a camel! It was really tall and slightly terrifying when it stands up and down – like a living roller coaster. 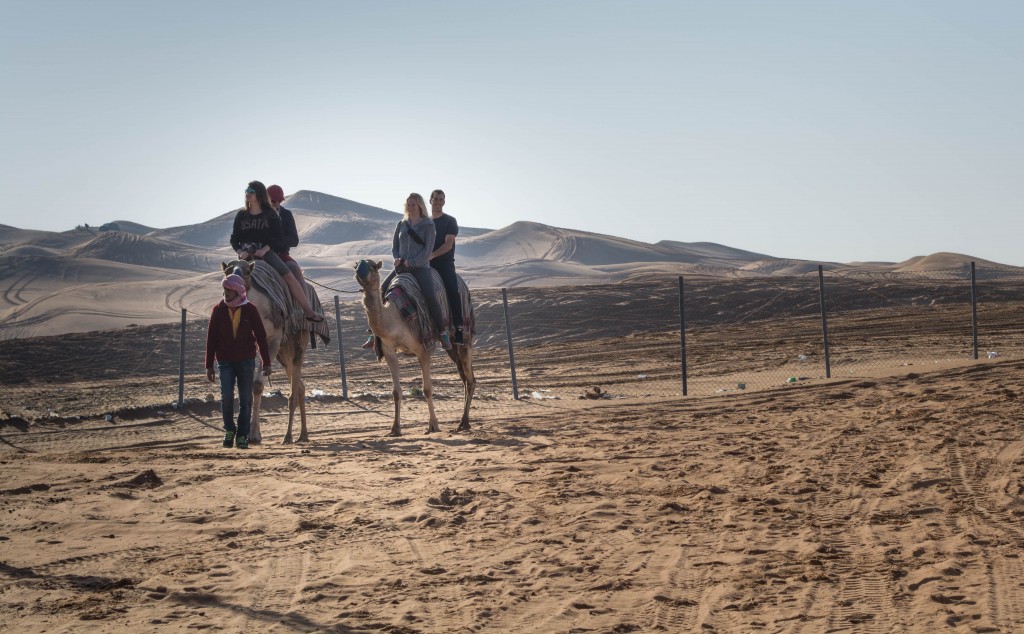 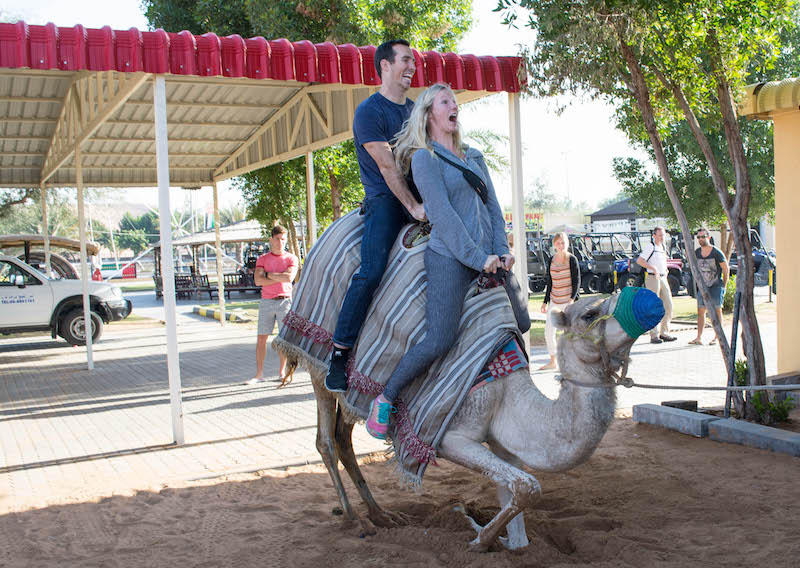 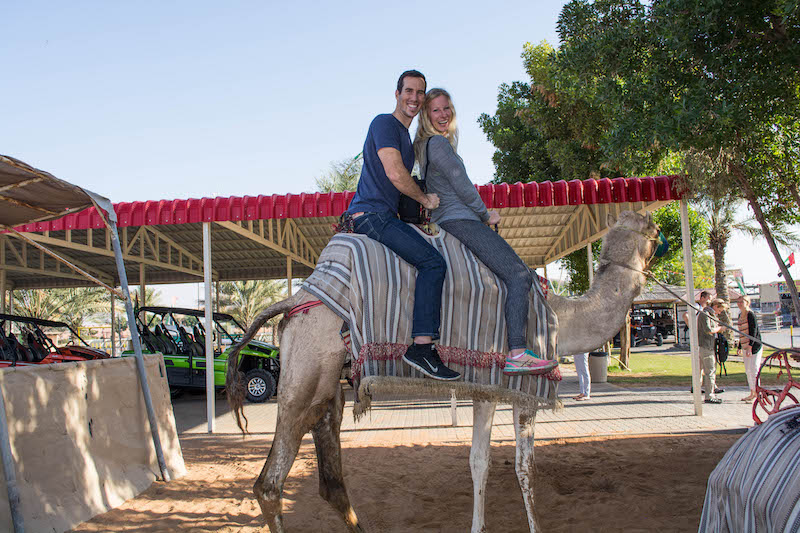 Then, we went “dune bashing” which was 50x more fun than I expected. I’ve driven my old Jeep through sand dunes quite a bit, but this guy was a PRO. I don’t think I’ve ever heard Amanda giggle and scream more, it was a blast. We dipped, slid, and thankfully didn’t roll all over the dunes. 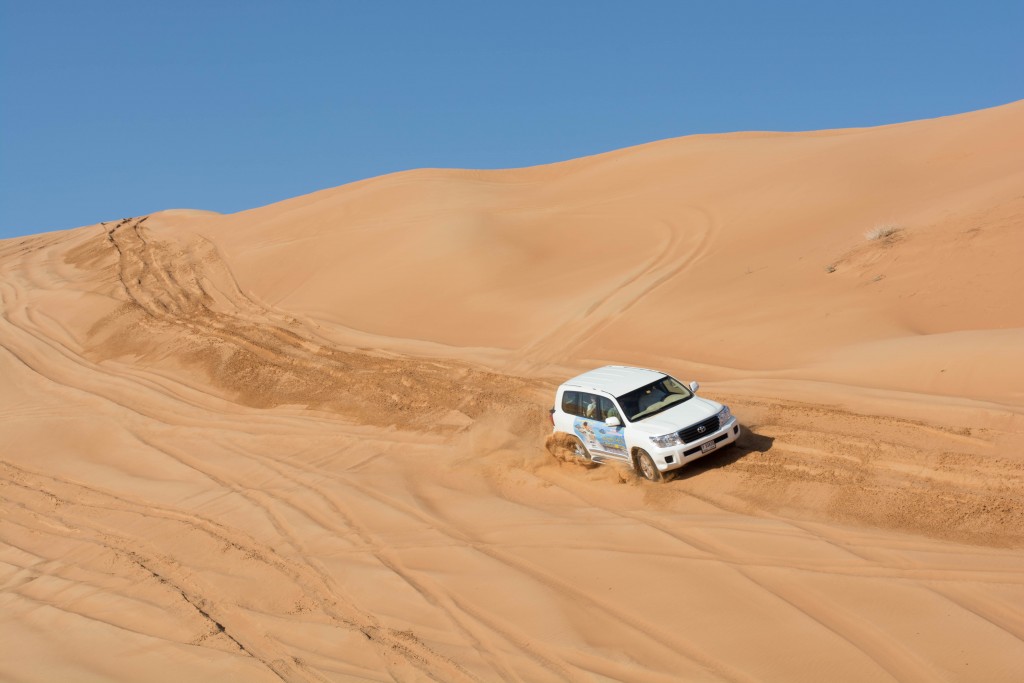 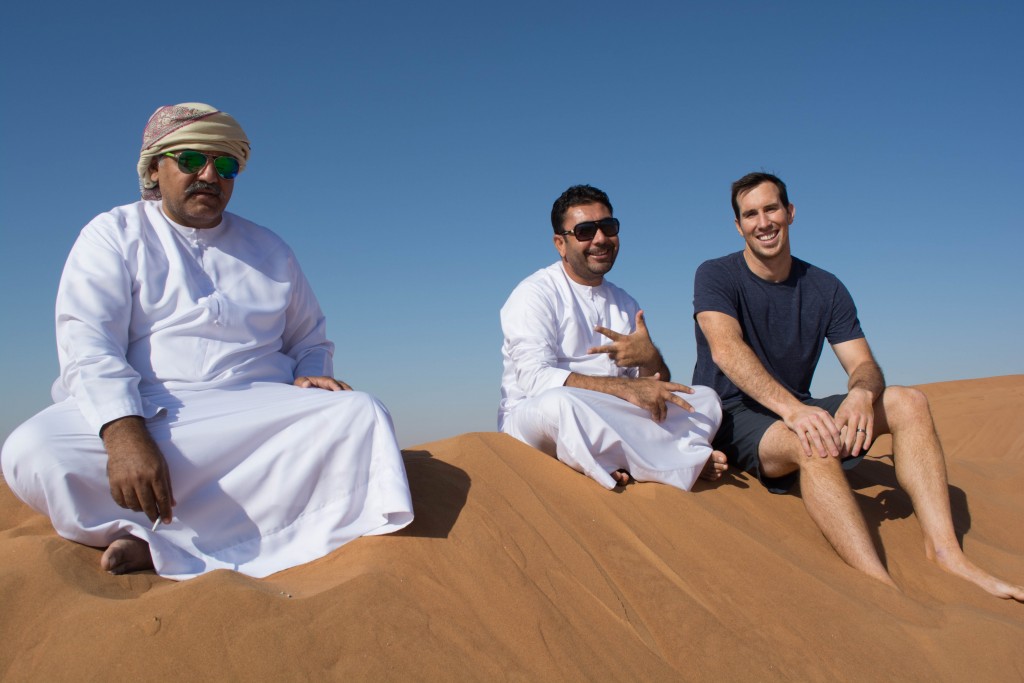 The last part of the “safari” was sand boarding down a huge dune standing or sitting on a snow board. It was pretty fun and fast! Amanda and I both ate it pretty good. We’re two feet athletes… not the best with our feet tied together. 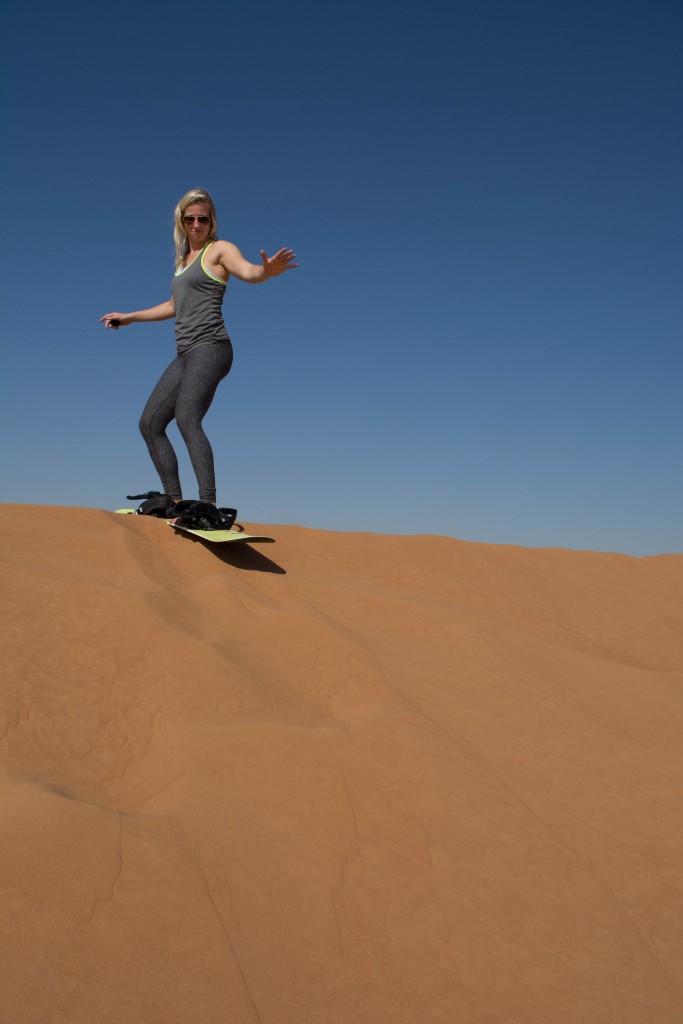 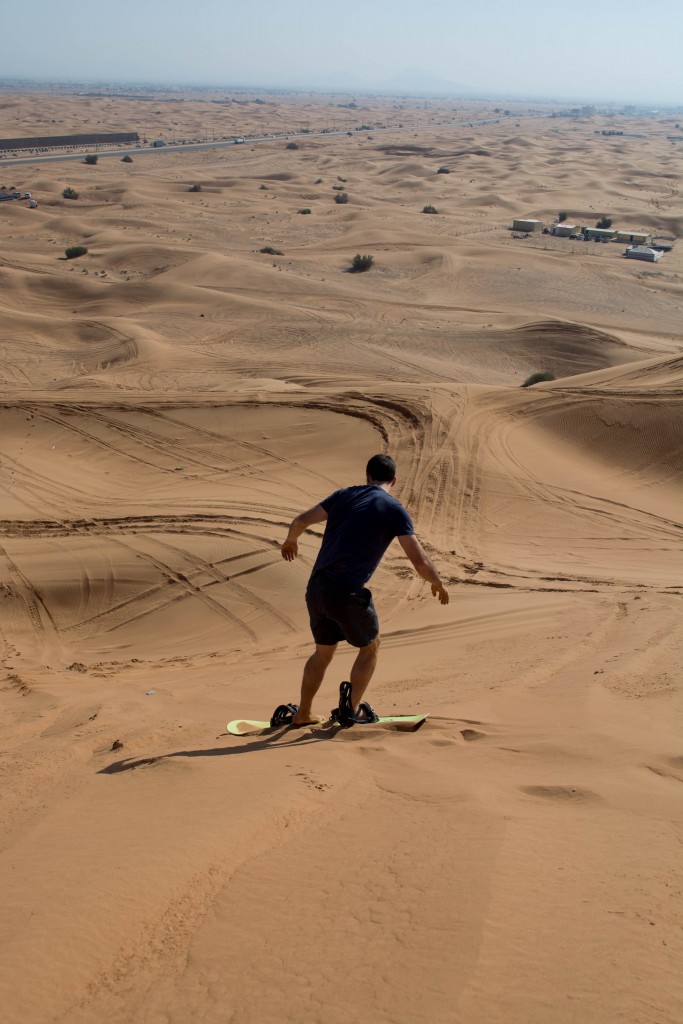 We walked through the world’s biggest mall and saw a cool water fountain show in front of the world’s tallest building, Burj Khalifa, which is an awe inspiring 828 meters tall.

Dubai does it big. They have lots of money it seems and they like to have the biggest of things. At one point on our safari tour, the driver pointed out a big hill with a flat top. They are making their own mountain so they can turn it into a wild animal park on a mountain… why not?

The architecture in Dubai is absolutely fascinating and amazing. It’s certainly the place with the most unique and magnificent buildings we’ve ever been. It’s insane and definitely worth visiting just for this alone.

They also like bright lights, shiny things, fancy cars, etc. It’s like Las Vegas but not as depressing and gross (and probably literally 20 times bigger). 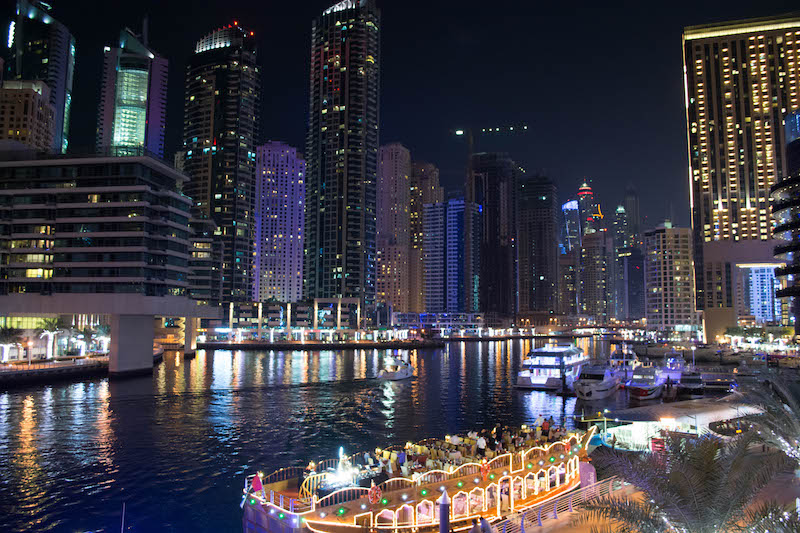 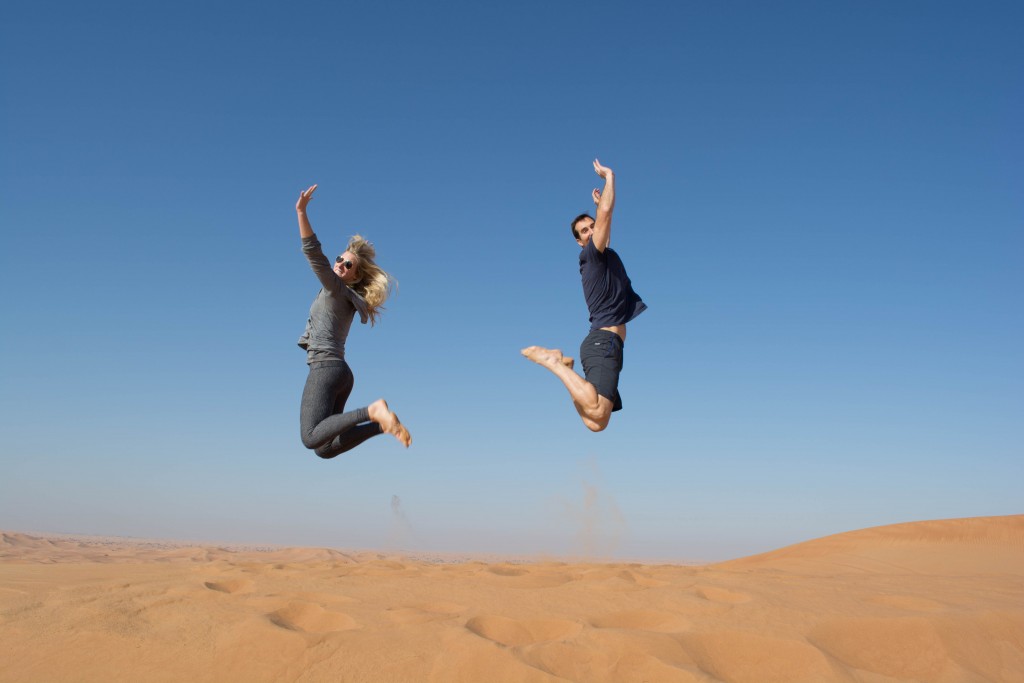 We just bought tickets to Bangkok with a 24 hour layover in Dubai on January 7th, 2016!!! Rotating buildings, fake islands, summer skiing, and crazy adventures – we’re coming for you!